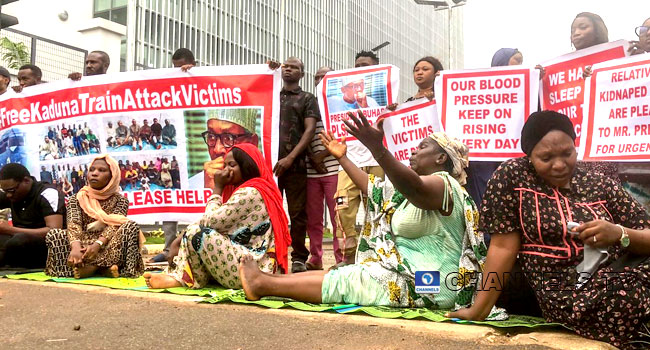 Relatives of the victims of the Abuja-Kaduna train attack on Monday picketed the headquarters of the Ministry of Transportation in Abuja, following the release of a new video by the bandits.

The protesters who occupied the main entrance to the ministry on Monday asked the Federal Government to take steps to secure the release of their loved ones who were abducted by gunmen at Katari village on March 28.

A spokesperson for the protesters, Ahmed Aruwa, said they would continue to block the entrance of the Ministry of Transportation until they get a definite response from the government.

The demonstration came barely 24 hours after the bandits, who are holding the victims in captivity, released a new video in which they were seen manhandling some of the victims and flogging them with sticks as they cried and pleaded for help.

Although , some of the train passengers have been released after ransoms were reportedly paid, dozens of victims are said to be left in the custody of the bandits.

In the new clip, one of the abducted passengers was captured narrating how they were kidnapped and lamenting that the government has failed to secure their release.

He pleaded with members of the international community, including the United Nations, the United Kingdom, the United States, and France, among others to help secure their release.

While the captive said the terrorists have no intention of keeping them longer than necessary in the forest, another female victim was seen crying and called the Federal Government ‘wicked.’

In the process, a man who seemed to be a leader of the gang threatened that the terrorists would kidnap top government officials, politicians, and senators.

Amid the outrage sparked by the release of the video, the Presidency said it was not new all over the world that terrorists use propaganda and violence to force governments to accept or submit to political demands.

A spokesman for President Muhammadu Buhari, Garba Shehu, in a statement on Sunday insisted that the nation’s security and defence forces were not clueless or helpless.

He explained that the security agencies have their plans and ways of doing things that they would not display in the media.