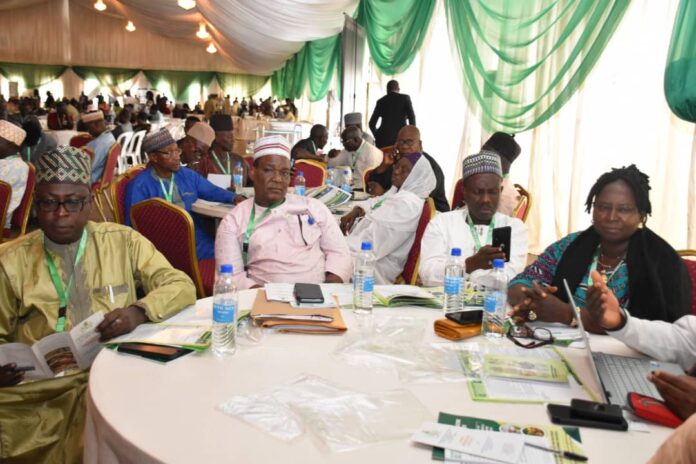 Represented by the Director, Department of Agriculture Land and Climate Change Management Services, Engr Shehu Bello, the Permanent Secretary stated that the Agricultural Commodity Value Chain Development as a corner stone and strategic implementation imperatives for the prevailing sectorial policy framework requires a robust discussion and deliberate decisions on intervention models, the next steps for the major subsectors namely; Crop/Horticulture production, Livestock/ Veterinary Services, Fisheries and Aquaculture as well as Agribusiness undertakings.

Umakhihe pointed out that “the foundation to achieve the desired success was the commitment to the provision of incentives, increase the output and quality of agricultural commodities to meet and surpass national requirements as well as achieve a diversified economic base with Agriculture leading the way for the non-oil sectors of the economy”.

The Permanent Secretary revealed that the Ministry through the launch of National Agricultural Technology Innovation Plan 2022 – 2027, NATIP, has demonstrated commitment of the sector to address all conceivable challenges besetting the sector with a focus on strengthening and developing Agricultural Value Chain.

According to him, the impact has been enormous as it contributes to food security, increases productivity and efficiency, engenders diversification, generates higher incomes and reduces post-harvest losses and above all, generates employment opportunities.

He stated that the ministry would prioritized its efforts of increasing agricultural processing capacity in the country through the establishment of several cottage industries for the production of staple food products in a competitive and comparative advantage manner.

He added that it would ensure a steady off-take of produce from out-growers, enhance the income of farmers and entrepreneurs across all commodity value chains.

He further revealed that the Technical Session was the forerunner to the Council Meeting and it was dedicated to exchange of ideas on agricultural development process in the country with a view to setting the tone of issues for deliberation and discussions at the Council.

The Permanent Secretary urged the stakeholders to approach the deliberations with broad mind, add value to all the issues for the overall impact of the sector in the economy, proffer concrete and practical suggestions that would assist the Council in reaching meaningful decisions.

In his welcome address, the Plateau State, Commissioner of Agriculture and Rural Development, Dr. Hosea Finangwai appealed that the memorandum for the upgrade of the Potato Station at Karu be given priority on its merit.

He added that “the State accounted for over 90% of the production, livelihood and income of farmers was threatened by the monstrous potato blight.

In his Vote of Thanks, the Director, Planning and Policy Coordination, Alhaji Ibrahim Bello stated that the Stakeholders would use the opportunity to share experiences and good practices on value chain development in the agricultural sector as it affects food security and economic development for adoption and replication in the sector along various ecological peculiarities.

He thanked the Government of Plateau State for the warm reception and support despite other competing obligations and engagement of the State.