HomeHeadlinesI can take a bullet for Jonathan - Bishop Kukah
Headlines 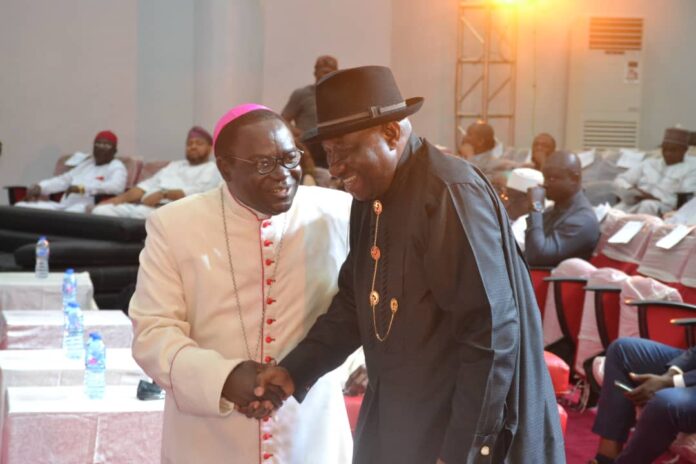 * Catholic Bishop of Sokoto, Kukah says he can take a bullet for fmr president Jonathan

* Says that Jonathan is the face of democracy in Africa

* Frowns at ethnic inequality in appointments in Buhari’s administration

*As Jonathan raises alarm over fake news and propaganda

Catholic Bishop of Sokoto Catholic Diocese, Bishop Hassan Kukah, on Tuesday spoke very passionately of former President Goodluck Jonathan, pledging that he “can take a bullet” for him.

Kukah made this strong vow while speaking during a Panel Session at the 2022 Peace Conference organized by the Goodluck Jonathan Foundation.

While describing Jonathan as the face of Democracy in Africa, he recalled how the former president cancelled a very important trip to meet up with President Muhammadu Buhari to sign the Peace Accord prior to the 2015 elections.

“I was at the centre of negotiations to get Buhari and Jonathan together to sign the Peace Accord,” he said.

The revered cleric who is a staunch critic of the president Buhari administration, further frowned at the ethnic inequality in the appointment of top government officials in the Buhari cabinet, but expressed satisfaction that the current administration will soon leave office.

Kukah also informed that the first part of the Peace Accord preparatory to next year’s election, would be signed soon, probably after the commencement of campaigns slated for September 28.

In his closing remarks, Jonathan called for an end to hate speech fake news and propaganda going into the 2023 elections. He noted that the biggest task for the one who eventually becomes president in 2023, would be to protect the country from internal aggression.

“Before now, we were afraid of the gun. But now, we are afraid of fake news and propaganda. If we destroy our country, then why then will we need a president? We need to have a nation first before those vying for governors and president can contest,” he noted.

On the need to continue the conversation around credible elections, he said: “Advocacy is critical. We have to keep talking. Because dictators harass people who talk, it means people are listening. So we will not stop talking until our country is better”.

In his keynote address, Chairman of the conference, Dr Mohamad Ibn Chambas, Member, West African Elders Forum, stressed that the Federal Government and all other stakeholders must play their role to guarantee credible elections.

Speaking on the central theme of the conference- ‘Nation Building: The Role of Elections in a Multi-Ethnic Context, he called on the media including the social media to be responsible in reporting elections.

Also speaking in a goodwill message, Bayelsa State Governor, Douye Diri who was represented by his deputy, Lawrence Ewhrudjakpo, recalled that Nigeria would have been in “pieces” and not in “peace” in 2015, if Jonathan had not done what he did.

Reiterating the popular phrase of Jonathan which connotes that his political ambition is not worth the life of any Nigerian, he said “until our ambitions are buried below the ambitions of others, we will not have peaceful elections”.

While the presidential candidate of the Social Democratic Party, SDP, Prince Adewole Adebayo attended the conference in person, those of the All Progressives Congress, APC, Peoples Democratic Party, PDP and the Labour Party sent in representatives.