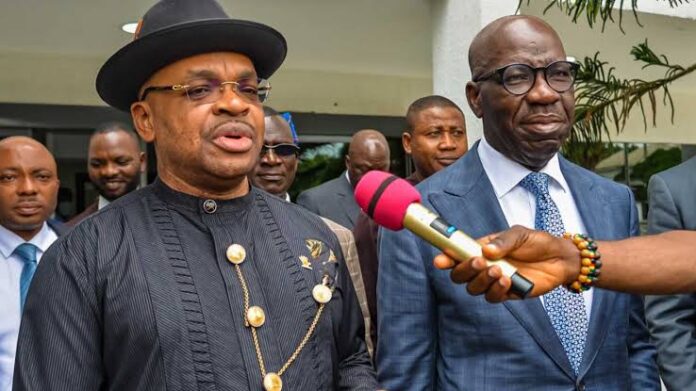 Governor Godwin Obaseki of Edo State has said that Nigeria is producing a new set of politicians, and that his Akwa Ibom counterpart, Mr Udom Emmanuel is the leader of the new set.

Obaseki who made this known at the inauguration of a 9.5Km road in Udung Uko Local Council, the first in the area said Emmanuel has remained strategic in his infrastructural development and has shown vision in repositioning the business environment of the state.

“This is not just a road, but a social and economic connection between Udung Uko people and the rest of the state, because a road does not mean anything if it doesn’t bring economic benefits to the people “.

On the extension of the road to Mbo LGA, which is less than 10Km drive from Udung Uko, Mr. Emmanuel said the contract has also been approved, and assured that it would be completed before the end of his administration.

The Paramount Ruler of Udung Uko, Edidem Bassey Edet, on behalf of other royal fathers in the area commended the Governor for fulfilling his promise after his predecessors could not do so.

“Through this project, you’ve proven your worth, and the social contact you signed with Udung Uko people, you have fulfilled it,” Edet said.

The royal father added that with the new road in place, the area would begin to generate income in order to finance some of its projects, which he said would yield benefits to the people.