HomePoliticsBMO to Atiku: Your party in disarray, you're unfit to fix...
Politics 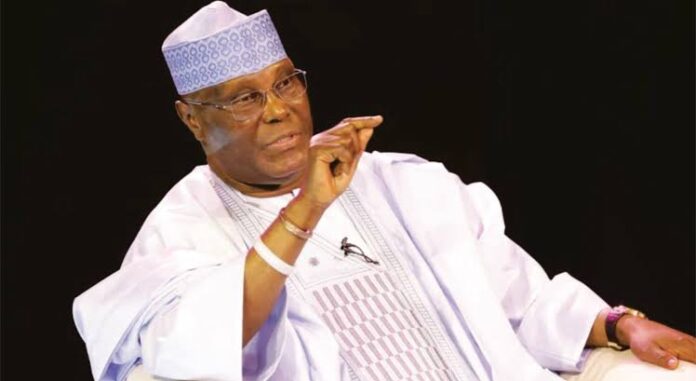 Buhari Media Organisation, BMO, on Sunday sais any presidential
candidate of a political party that cannot put his house in order is
in no position to promise to run a government of national unity if
elected.

BMO made this observation in reaction to the presidential candidate of
the Peoples Democratic Party (PDP), Atiku Abubakar’s social media
broadcast tagged: “My New Social Contract for a New Nigeria”.

Atiku had said in that broadcast that the All Progressives Congress,
APC, government will be remembered for how it failed to maintain the
integrity of our unity, and how it put a knife between the things that
hitherto held us together.

BMO, in a statement signed by its Chairman Niyi Akinsiju and Secretary
Cassidy Madueke, noted that “Atiku’s claims on the country’s unity is
principally an academic marketing coinage that has no relation to the
true picture of the country.

“It’s either he is deliberately lying or he is out of tune with
reality, hence he is suggesting solutions that are either already
being implemented in the country or are far away from the real
situation on ground. More than that, there is evidence of deliberate
falsehood that runs through the gamut of his presentation.

“For starters, that Nigerians are not united is a figment of his
imagination, a fantasy that he wants to impose on the peoples’ psyche.
The absolute truth is that Nigeria is well integrated and this is
evident in the day-to-day peaceful co-existence of people of different
tribes, religions and ethnicities.

“This unity also reflects in political appointments; it has been
established that there is balance in the appointment made by this
administration.

“In any case, we do not expect Atiku to understand the true situation
of things in the country. A mind that has been on self-exile over a
long time can only relate with Nigerians with a collection of fanciful
thoughts. No wonder there was a disconnect in his media broadcast, a
huge gap between what he was saying and the reality on ground which
revealed that he does not understand the nuances of Nigeria’s
political and economic system”.

With regards to the economy which is one of the areas Atiku spoke
about, the pro- Buhari group explained that “from 1999 till date, no
leader has taken the country through a globally induced difficult
economic environment caused by revenue shortages, imported inflation
and other external forces, like President Muhammadu Buhari.

“On the other hand, Atiku was the vice president between 1999 and
2007, a time when the country earned high in revenue and had
convenient Capital inflow with nothing tangible to show for it. We
challenge the former vice president to point to one legacy
infrastructural project that can be credited to his government.

“He also bragged about being part of an economic team during his time
in government, but it was under his watch that Nigeria recorded an
inflation rate of 28.21%, in August 2005; the highest since 1999 and
this was at a time when there was no COVID 19 pandemic, no
Ukraine-Russia war and no oil global crisis.

“Furthermore, it is on record that his government sold Aluminium
Smelting Company of Nigeria (ALSCON) which was valued at $3.2 billion
(N480 billion) to a Russian company, Russel for $250 million (N37.5
billion). Not just that, the staff were retrenched without being paid
their entitlements until recently, under the persuasion of the
Federal Government. What can be more criminal than this”.

BMO called on the Federal Government to commence a criminal proceeding
against Atiku for selling ALSCON at a criminally low value to his
friends and cronies like he is promising to do with the Nigerian
National Petroleum Company Limited (NNPC)”.

BMO added that with reference to Atiku’s statement on corruption and
‘unprecedented malfeasance’, “we advice him to wake up in the morning
and look in the mirror he would know who is corruption personified”.