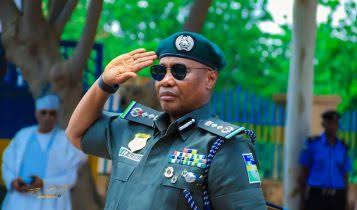 Inspector General of Police, Usman Alkali Baba has reiterated the commitment of the Nigeria Police Force to collaborate with the 36 state governors in the effort to tackle headlong, all forms of insecurity in the country.

The IGP who disclosed this on Monday when he called on Governor Yahaya Bello at the Lugard House, Lokoja as part of his familiarisation visit to Kogi State Police Command.

The IGP promised to utilize his close relationship with Governor Yahaya Bello since assumption of office to rid the state of crimes and criminalities.

“As far as I am concerned, security is all about making lives better in our immediate society in terms of guaranteeing the lives and property of citizens

“We, as government’s security agencies, will continue to do our best while the citizens on their part have to complement our efforts.

“Governor Yahaya Bello has always remained outstanding as he has severally visited the headquarters of the Nigeria Police Force to seek the way forward in tackling insecurity in Kogi state”, the IGP said.

Responding, Governor Yahaya Bello commended the Usman Alkali Baba for his ingenuity and professionalism in safeguarding the country stressing that these had continued to manifest right from when he assumed office.

Bello assured the IGP that his administration would continue to give security of lives and property in the state topmost priority.

“In a bid to check insecurity in Kogi, my administration has been able to provide 200 Patrol Vans and 500 motorcycles as well as communication gadgets to assist Kogi Police Command in its duties.

“My administration has also established joint taskforce tagged ‘Operation Freedom’ including Professional Hunters and Vigilantes to complement the efforts of the security agencies in combating crimes.

“My administration has also declared war against political thuggery, violence, harassment and other forms of vices in the state” Bello said.

The Nigerian Pilot reports that the IGP also to inaugurated some completed projects executed by the Nigeria Police Force at Kabba as part of his visit to Kogi State.