NGO partners NOA to improve living conditions of youths, downthrodden in the society 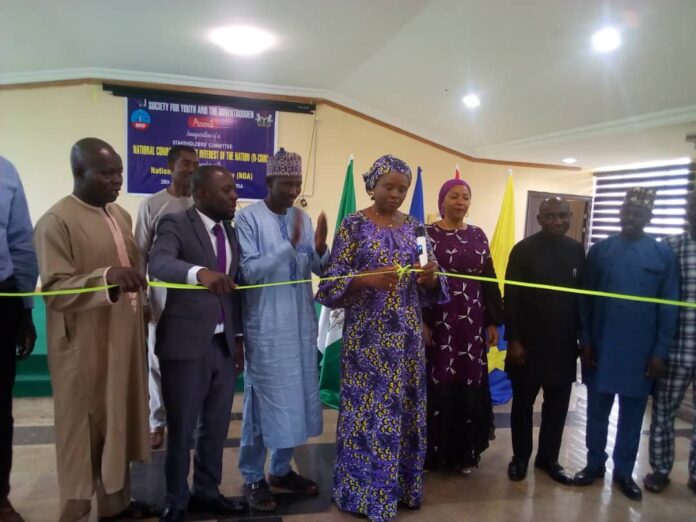 In concerted efforts to safeguard and improve the lives of youths and downthrodden in the country, Society for the Youth and Downthrodden, SOYD, has partnered with the National Orientation Agency, NOA, to ensure it achieve the goal of providing succour and bridging such gaps.

Speaking today during the inauguration of the National Committee on Interest of the Nation, N- COIN, an initiative of the Society, Director General of the National Orientation Agency, Dr Garba Abari ably represented by a Director in the agency, Mrs Theresa Maduekwe noted that with the level of insecurity in the country and the vulnerability of youths to such challenges, the inauguration of the committee was apt as this will help divert their attention from such vices.

Abari stated that on issues of youth employment and empowerment, the NOA through its program has sought ways to bring this challenge to its bearest minimum, hence its partnership with the Society which has the interest of the youth and downthrodden as its main focus.

He said: ” The youths population are the biggest or largest and they need to be taken care of. This Society for the Youth and Downthrodden is now a national project to cater for the youth and downthrodden. Government has considered it as noble and important to achieving the goals of providing better lives for youths and the downthrodden.

“Also considering that we have so many people out of school, some of them can not go to private school and some don’t even have the normal public schools provided that is a major challenge which has serious effects in the development of such persons. So when we look at it this society has taken a step to bridge this gap.

“And I also believe that is why the Ministry of Humanitarian Affairs have also keyed in with this Society. They gave their support that they should go ahead and ofcourse the National Orientation Agency deemed it fit to support because an organization like this would help the work of improving the livelihood of the youth and the downthrodden.”

Also the President of The Society for the Youth and Downthrodden, SOYD, Comrade Gabriel Ogwuche, stated that the N-COIN initiative was borne from the society, out of the need for nation building and creating a platform to achieving such mission to help the youth and downthrodden.

Ogwuche said that the at conception the initiative had two mandates which were to fight the forces of poverty and the other was never to forget the essence of the first mandate adding that the committee has been given the authority to lay ambush on poverty, hunger and other vices affecting the provision of better livelihood.

“It is pertinent to note that What we have in the society today is not the battle of cancer, tuberculosis, HIV/ AIDS or other illnesses it is the battle or feeling of hunger, poverty, joblessness, the battle of dejectedness and corruption. This necessitated the creation of this initiative in the interest of the nation.

“The society sues for peace and there is nothing to hide, the society is for the betterment of living conditions of the youth and downthrodden. Our activities and actions is in the seeking of indivisibility of Nigeria and of the growth of our nation’s economy. The country’s economy is characterized by consultation and not production, with nothing to produce, to project and this committee is out here today to do something about it,” he added.

He further stated that the society will work towards the growth and development of the country and stabilizing mental health of its citizen.