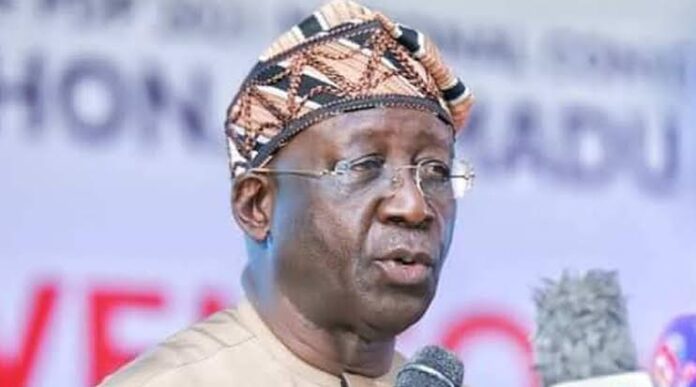 *Says call for his resignation in the interest of equity, justice and fair play

*Due process must be followed, PDP has rules conventions, says Atiku

There seems to be no end in sight for the internal crisis rocking the main opposition political party in Nigeria, the People’s Democratic Party, (PDP) as the stakeholders from the Southwest have demanded the resignation of its National Chairman, Senator Iyorchia Ayu in the interest of equity, justice and fair play.

However, its Presidential candidate, Alhaji Atiku Abubakar has stated that their request is achievable but with recourse to the party’s constitution and lay down principles.

It would be recalled that Governor Seyi Makinde presented the demands of the South West PDP stakeholders at an interactive session with the former Vice-President Atiku on Wednesday in Ibadan said mirage problems confronting the party are surmountable but with the caveat that the issue of lopsidedness in party elective positions and non-compliance with the constitution and lay down principles guiding its operation must be addressed.

“We have challenges and issues but we have capacities to address the issue in PDP.

“The challenges in PDP are not all about Govs. Makinde, Nyesom Wike, Ugwuanyi Ikpeazu, and Samuel Ortom are being portrayed as constitutional matters.

“We don’t have issues either with our party, (PDP) or its Presidential candidate, Alhaji Abubakar

“We have put what happened during the party’s presidential primaries and the selection of the Vice-Presidential candidate behind us.

“As a party, we must practice what we are preaching. It is all about integrity and honour not about any individuals.

“PDP structure must reflect national unity as preached. We have the capacity to do so and our capable presidential candidate.

“Our demands as PDP in the South West can be subdivided into pre-election and post-election demands.

Makinde added that a situation whereby the Presidential candidate, National Chairman and Director-General of Atiku Campaign Organization are from the North East, North Central and North West is unacceptable.

He, therefore, on behalf of the South West PDP demands that the National Chairman of the party must step down in the interest of equity, justice and fair play.

However, Atiku maintained that he has no problem with wherever any member of the party comes from but the constitution and the laydown principle of the party must be strictly adhered to.

He said the request of Governor Makinde on the restructuring of the party’s leadership is doable and achievable but with recourse to the party constitution.

“We cannot give the nation the kinds of leadership it wants without recourse to the constitution. The PDP has a constitution that guides its operation. Nothing must be done outside this constitution.

“The most important challenge starring us in the face is the 2023 general elections. We can win the election if we want to.

“In 2003, as Director General of Obasanjo/ Atiku Campaign Organization, I delivered five out of the six states in the South West to the PDP. History will repeat itself in 2023 but with a formidable team”, he added.

In his address, the Vice-Presidential candidate of the party, Dr Ifeanyi Okowa described Nigeria as a sick nation that needs physicians.

He submitted that the All Progressives Congress, (APC) led administration in the past seven and half years has balkanised the Country, adding that Nigeria today is not the Nigeria of our dream

“Nigeria is sick. It is the right to prescribe appropriate medication.

“When you line up all the candidates, the best to pick among the lots is Atiku. He is the only medication acceptable to Nigerians.

“We are not discussing the same faith ticket but about somebody that has the charisma and experience to lead the Country to the Promised Land.

“He has respect for all. That is why I am privileged to be his Vice-Presidential candidate. With the support of all the stakeholders, we can commence the process of the Country that has been battered by the APC-led government.

“We are one party in PDP. We have reconciled our grievances. We are moving ahead as one family.

“Also speaking at the occasion, the Chairman of the PDP governor’s forum and governor of Sokoto state, Alhaji Aminu Tambuwa described the same faith ticket as the albatross of the APC.

“According to him, the adoption of the same faith ticket in a plural society like ours is the beginning of the failure of the APC coupled with 8 years of misrule.

“Nigerians are tired of APC and yearning for a change that can only be found in PDP.

“Atiku is the only candidate that can deliver the Country with his wealth of experience as Chairman of the Economic Council under former President Olusegun Obasanjo-led administration, ” he said.

Speaking on behalf of the PDP former governors, Chief Olagunsoye Oyinlola assured Atiku of the support of the members of the party from the South West.

“We want to assure your Excellency that we are united and solidly behind your course to succeed in 2023.

“Governor Makinde has been vested with the authority to discuss our proposal with you as members of the party from the South West”, he added.

Representing the interest of the members of the National Assembly, Senator Abiodun Olujinmi, representing Ekiti South Senatorial District said Atiku has all it takes to lead the country

She described Atiku as an Apostle of National Unity, adding that he has demonstrated this as a public servant and seasoned politician

Speaking on behalf of the National Chairman of the party, Iyorchia Ayu who was unavoidably absent, the National Vice Chairman North, Umar Damagun lauded the efforts of the South West PDP led by Makinde at ensuring the success of the event

He stressed the need for members to put behind them happenings of the past and form a formidable team at ensuring the success of the party’s Presidential candidate in 2023.

Chimaroke Nnamani’s name on campaign list not a mistake – APC